For the Heritage Lottery Funded project, You Are Hear: sound and a sense of place, we commissioned a Sound Recordist, Stuart Bowditch, to capture some of the sounds of Essex in 2015/2016. We compiled suggestions from members of the public, gathered at survey events held last year, of typically Essex sounds that should be recorded. We also had some specific items in mind to compare with historic sounds already in the Essex Sound and Video Archive.

Stuart has busily been recording here, there, and everywhere to get a wide range of recordings. They will be deposited with the archive, so future generations can hear what Essex sounded like in 2015-2016. Clips are also being pinned to our online audio map of Essex Sounds. There, you can compare the sounds of today with sounds of similar places or events from days gone by (click on the ‘old and new’ option at the top of the page).

At the end of June, Stuart went on a week-long recording trip to the north of the county. Here are some of his thoughts after day one of his trip.

After packing my bags and picking up some kit from the studio I set off for the wilds of north Essex, happy to be leaving the south behind. Farewell to the estuary, to the busy Victorian terraces and crowded roads with a particular style of driving. It felt good to wave goodbye. And then say hello to a long queue on the A130. But despite that, I made it to the Essex Record Office to pick up some project flyers before heading to my first port of call, Marks Tey. Not exactly north, but the gateway to the Gainsborough Line, which takes you due north to Sudbury, via Chappell and Bures.

I’d sought permission to record from Abellio Greater Anglia but hadn’t heard back, so I asked at the station when I arrived. My slightly unusual request was met with some surprise and puzzlement, but after a couple of phone calls the station manager gave me permission, and I set off with my instructions not to stand next to the edge of the track. So I recorded a few trains passing through the station (a class 360 to Ipswich stopping and departing, a class 90 Intercity to Liverpool Street, a class 66 freight train to Felixstowe port and another class 360 to Liverpool Street) and waited for the Sudbury train to arrive.

The driver and guard seemed okay to have me on board, and I duly recorded the whole journey through Chappel & Wakes Colne and Bures to Sudbury. I wasn’t sure if it was just the way of things, but there were no announcements or tickets checked during the entire journey, which would have made the listening experience of recording a little bit more informative. On the return journey, however, an announcement was made about the ticket machine not working, which was a shame to miss as it added some personality to the soundscape.

I broke the journey at Bures and took a walk around town. I had to backtrack a few
hundred metres after I discovered that my tripod attachment had fallen off, but
luckily I found it next to a huge puddle in Water Lane.

Roving microphone by the River Stour

I bought a sandwich from the local delicatessen and found a very nice spot next to the River Stour from which to eat it and also to record. It was slightly raining, but that did nothing to  deter the house martins, ducks and ducklings, and occasional passersby from enjoying the peaceful moment.

Back in Marks Tey, I loaded up the car and drove west, through Coggeshall to see if my friend Walt was in. He wasn’t. That’s a shame as he said it’s particularly quiet standing in his garden and had invited me over to record one day. I had to leave that for another time. So I proceeded further along the A120 and saw a sign for Stisted. My friend Ed had said it was a particularly beautiful village, so I decided to take a detour. The buildings are great, so I decided to park up at the Village Green. As I did so the school bell was chiming, but unfortunately it had stopped by the time I had set up the microphone. I waited for half an hour there, but the bell never chimed again. However, I did get a great recording of the birds on the green which included chaffinch, greenfinch, robin and blackbird. There was also a reasonably continuous stream of cars making turns at the junction, but when they weren’t present the quietness was really pronounced and the recording will clearly indicate the impact that motor vehicles have on the sonic environment. I may return tomorrow if I’m in that area to try and record the school bell.

Next on the list was Halstead High Street, and I decided to make two recordings here, one at the bottom of the hill and one at the top. There was a constant flow of traffic along the high street, including many vans and heavy goods vehicles. There were also plenty of passersby going about their daily business, including people of all ages and social standings. One of the interesting things about this project is picking up the different accents and languages that can be heard in different parts of Essex today, and coming from the south of the county it was interesting to note that in an hour on Halstead high street I didn’t hear a single foreign language. The recording at the bottom of the hill features two van drivers loading parcels and letters from the Post Office and some children playing.

The recording at the top of hill was made next to the war memorial as light rain was falling, and also captured the moment that St. Andrew’s Church struck 5 o’clock.

The first day of recording had felt reasonably productive, and despite the promise of some traditionally British inclement weather the next day I was looking forward to more roaming and recording.

To hear more about Stuart’s adventures, plus talks from the rest of the project team and guest speaker Martin Newell, come to our official Essex Sounds launch. The event will be held at Colchester Town Hall on Wednesday 28 September 2016, from 6:00pm to 9:00pm. Attendance is free, but please register on our Eventbrite page.

There are many things for us Essexians to be proud of, and it seems that one of them is our county’s tendency to produce incredibly talented snooker players, most famously Ronnie O’Sullivan.

In more recent years two more top-ranked players have come out of our county – Basildon-born Stuart Bingham and Colchester-born Ali Carter. Bingham is the current World Snooker Champion, and as the 2016 competition gets underway tomorrow he will be defending his title in his first match of the competition – against Carter.

As these two Essex giants of snooker go head-to-head, we thought we would see which of them has the best Essex credentials. 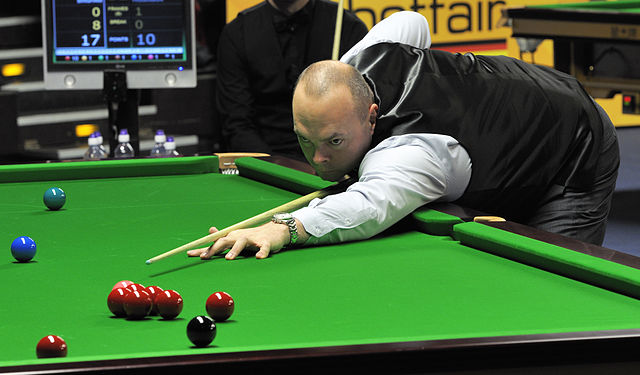 Stuart Bingham at the 2013 German Masters

Current World Snooker Champion Stuart was born in Basildon – but how far back can his ancestral roots be traced in Essex?

ERO specialist Sarah Ensor has traced his family back over 200 years in the county, to his 5x great-grandfather Thomas Moules. The Moules family lived and worked in the rural villages of Marks Tey and Little Tey, and their baptisms, marriages and burials can be found in the parish registers we look after at ERO.

Outside the towns Essex was very rural and the Moules lived in a farming community; until the latter part of the nineteenth century they worked as labourers on the land but later described themselves as horsemen – no doubt a step up the farming ladder.

The tradition of agricultural work was broken by Stuart’s great-great-grandfather Walter Moules (b.1869 in Great Tey), who started his working life as a labourer but joined the Royal Artillery, serving in India and Aden.

So far we have traced Stuart’s family back over 7 generations in Essex. A ‘widow Moule’ of Great Tey is named to in a deed of 1773 (D.DAt 45), so it is likely that Stuart’s roots in the parish reach back even further. With such deep roots in the county, Stuart can definitely claim to be a true Essex man. 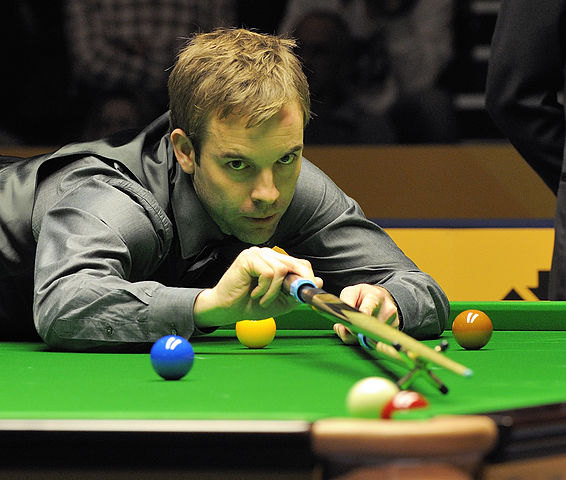 Ali Carter at the 2013 German Masters

Ali was born in Colchester and now lives near Chelmsford. He has twice been runner-up in the World Championship, losing to Ronnie O’Sullivan in 2008 and 2012. According to BBC Sport, he is ‘one of the sport’s best-loved and most-respected players, having twice overcome cancer and still been able to maintain his place among the world’s best despite a constant battle with Crohn’s disease.’

Ali’s Essex ancestry can also be traced back to the nineteenth century and beyond. Two of his great-great grandparents, William Hawdon and Emma Long, were both born in Loughton. Their daughter Aimee, Ali’s great-grandmother, was baptised in St Mary’s church in Loughton on 9 December 1898. William’s profession was given as a commercial clerk.

Another branch of Ali’s family tree takes us back to his four-times-great-grandfather James Piper, who was born in Colchester in about 1796. James is described in the 1841 and 1851 census returns as a labourer, but in 1861 he is recorded as an ‘itinerant bookseller’.

James and his wife Sarah had a daughter, Priscilla, born in Colchester in about 1826, who married Thomas Stoton, another Colchester man and a tailor by trade. In 1871 Thomas and Priscilla were living at 42 St Botolph’s Street, and Thomas employed 1 man and 2 women in his business.

Their daughter, another Priscilla Stoton, married William Waigh, originally from Bethnal Green, but he had moved his family to Woodfood by the time of the 1901 census, when he was recorded as a builder and rent collector.

In terms of the depth of their Essex roots, these two giants of snooker are very closely matched. Will they be as closely matched when they step up to the green baize tomorrow?

If you would like to discover how far back you can trace your Essex roots, contact us or visit our Searchroom to start your journey.