Just in time for the summer holidays, we have installed a new display in our Searchroom of a selection of the wonderful picture postcards we have of Essex coastal resorts.

In their heyday, the coastal resorts of Essex attracted thousands of holidaymakers every summer. Postcards can bring us something of the atmosphere of these holiday destinations – not only through the photographs on the front of the cards, but through the messages on the back as well.

Postcards have existed in various forms since the 1840s, but picture postcards only became widespread in the UK from the 1890s. The boom in postcards coincided with a huge increase in tourism among ordinary people, driven by the invention of paid time off and the ability to travel further from home thanks largely to the building of railways. A belief in the health benefits of sea air and salt water bathing also drove the development of coastal resorts.

The ERO’s postcard collection is one of the very few things we have which is not listed on our online catalogue. If you would like to see postcards from our collection for a particular place, please ask staff who will be able to advise you on how to order them.

See the Flickr albums below for a flavour of the collection, and do stop for a look at the display next time you are visiting.

Southend’s origins are as the ‘south end’ of the ancient parish of Prittlewell, occupied by isolated farms. In the late eighteenth century a fashion took off for visiting the seaside for the supposed health benefits of bathing in and drinking sea water. Southend, being relatively easy to reach from the capital, became a popular place for London’s fashionable gentry to visit. Southend’s reputation as a resort for fashionable, wealthy visitors would all change with the arrival of the railway, which reached the town in 1856. This drastically reduced journey times and costs, and meant that a trip to the town was, for the first time, within the reach of ordinary people. New entertainments and accommodation were built to cater for the masses of tourists who now flooded Southend every summer. In 1889 a new iron pier replaced the original wooden one. It included an electric railway, the first of its kind on a pleasure pier. Visitors might still come for their health or to enjoy a quiet retreat, but people after noisier entertainments could avail themselves of donkey rides or boat trips, or take in a performance by a brass band or pierrot troop, perhaps while enjoying an ice cream. 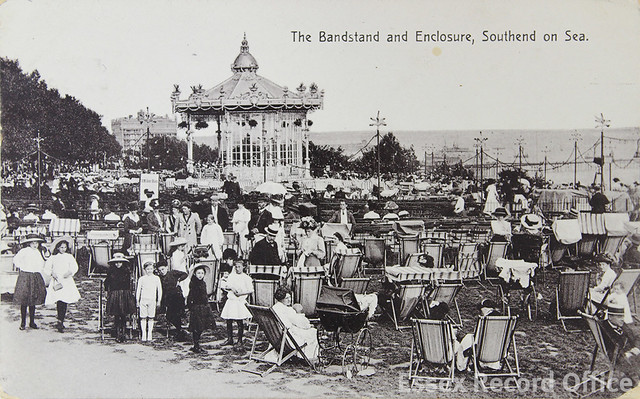 The resort of Clacton-on-Sea was founded in 1871 with the opening of a pier, built by civil engineer and businessman Peter Bruff, who had also played an important part in the development of Walton. The Royal Hotel opened in 1872, also built by Bruff, initially standing alone at the base of the pier. By the 1890s the pier had been extended, and housed hot and cold sea baths, and the Pavilion theatre at the pier head. The railway reached Clacton in 1882, opening it up to even more visitors. In 1938 Billy Butlin opened his second holiday camp at Clacton, which was visited by thousands during its lifetime until its closure in 1983. 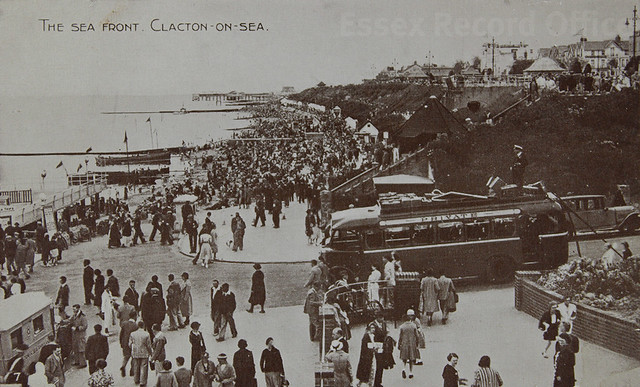 The development of Walton-on-the-Naze began with the opening of the Marine Hotel in 1829 and the town’s first pier in 1830, both built by Mr Penrice of Colchester. The pier was the main way in which visitors would arrive and depart, travelling on steamships coming from London and Ipswich, at least until the railway arrived in 1867. By the 1890s Walton had a second, much longer pier, with an electric tramway running its 790 metre length. Other attractions for the Victorian and Edwardian visitor included pleasure craft, bathing machines, theatrical entertainments, and later cinemas. 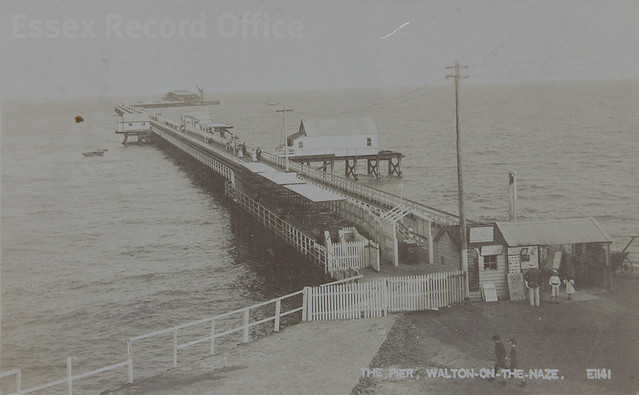 The development of Frinton-on-Sea began a little later. In 1886 the Marine and General Land Company published plans for creating ‘a high class watering place’ at Frinton, including hotels, a marine parade, a cricket ground, and tennis lawns. One undated postcard sent from Frinton reads: ‘Yesterday we went to Frinton and enjoyed it very much, it is so pretty. You would like Frinton there are such lovely large private residences each standing in own grounds along the front – a very select place. Only 4 large hotels and no boarding houses.’ 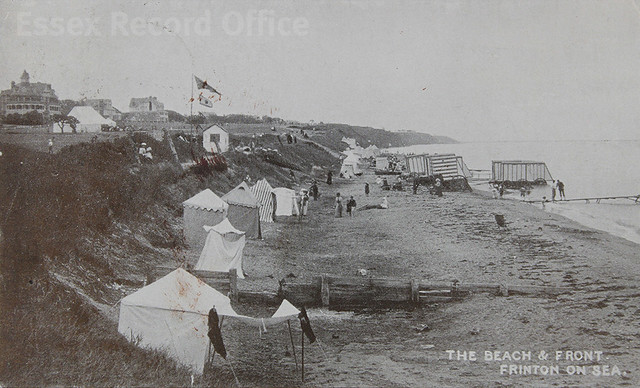